Danganronpa: Trigger Happy Havoc is the first game in the Danganronpa series. The game is characterized as an adventure visual novel and follows the life of Makoto Naegi, an average student selected via lottery to join Hope’s Peak Academy. 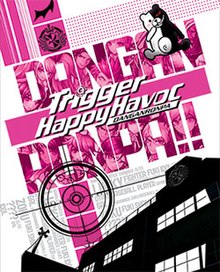 Hope Peak Academy is known for recruiting students who are each a master of their own given discipline.

As Naegi arrives on campus he loses consciousness and finds himself trapped inside of the school with fourteen other students. Their captor, an adorable yet unsettling remote controlled bear,  Monokuma, reveals that the students will be forced to live in this school forever; the only way for them to “graduate”, to escape, is by murdering one of their fellow classmates and getting away with it.

The cute Monokuma bear and light hearted animation juxtaposed with the bloody murders, elaborate executions, and overall theme create a fantastic game that I would recommend everyone playing.